There is a common misconception that leaders and managers are interchangeable. If someone has a management title then most assume they are a leader as well. One reason for this is because they are referred to as being a part of the company’s “leadership” team. This belief couldn’t be further from the truth.

Managers are people who you report your absences and vacation time to. They approve your time and assign you tasks. That’s the extent of their role. Leaders however are transformational people who mentor, guide and motivate their employees. They are smart enough to know when to delegate and to surround themselves with competent people so they don’t have to get down “into the weeds” of day to day operations. Leaders are strategic, critical thinkers that align their team with the company’s organizational goals.

What leaders are NOT is insecure. 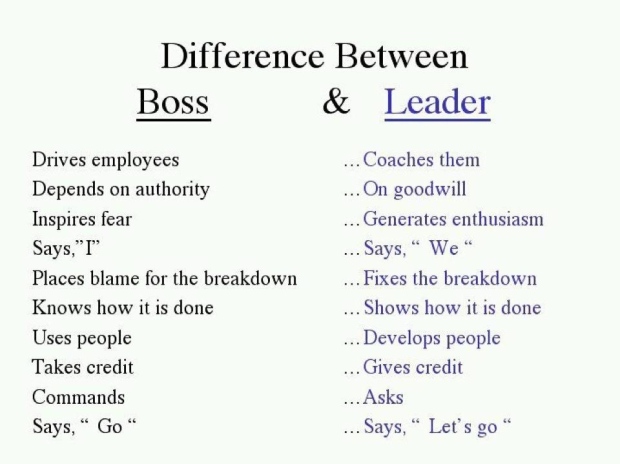 It’s impossible to constantly second guess yourself, hide from decision making and be non confrontational as a leader. However, this seems to be happening more often than not. There is an old saying that people don’t leave their jobs, they leave their managers. I’ve seen arguments for and against this theory but I see both sides.

To thoroughly enjoy your job, reporting to someone you can’t get on the same page with is difficult to say the least. What makes the situation almost unbearable is when there is no one in the chain of command you can turn to because they are either as incompetent as your current manager or too far up the ladder and not approachable.

One of the worst characteristics of a superior is being insecurity. If you’re like me, you thrive on challenges and coming up with innovative solutions to problems. It forces you to use your mind and breaks the monotony of just showing up to work everyday and logging your mandatory 8 hours. One would think that having a proactive employee that brings solutions to the table rather than problems and ideas for process improvements with a plan of execution should be a good thing. Should being the keyword. But apparently it is only a good thing when you are dealing with an actual leader and not a manager disguised as a leader that’s more concerned about being upstaged than the profitability and functionality of the business.

Here’s the sad truth about a lot of people. They are competing with you even when you aren’t competing with them. You can somehow get thrown into a boxing ring, the bell rings and you’re suddenly expected to fight. You didn’t even bring gloves because you weren’t aware there was even a match. But what do you do when you don’t want to compete, fight or run the race?

The answer is simple.

Insecure leaders are liabilities and the worst kind of a wasted resource. While ther focus is on you and making sure that you don’t outshine them, they are missing the balls being thrown at them and letting them drop. Picture a person with a tennis racket, standing at attention because they know the automatic ball machine is about to start. However, instead of hitting the balls, they are smacking them upside the head because they are busy watching you standing on the sideline just minding your business. Every once in a while they hit a few balls to get somewhat of a decent scoring percentage but mostly their focus is on you.

At some point the barely average score won’t be enough and that person will be dismissed. In the meantime, stand on the side and continue to practice perfecting your game because indirectly that former “leader” just opened the door for you to finally be in the match. And not the match you were thrown in against your will, fighting against an unworthy opponent, but the one you deserve because you did everything you were supposed to do.

When that opportunity actually arises, be the type of leader you would want for yourself and keep your eye on the ball.