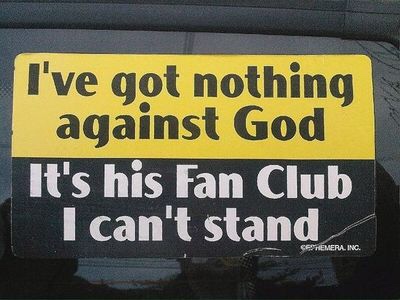 Three xanax and several temper tantrums later, I’m finally at a place to write this post. Of course my plan was to write something completely different this week. A piece that was more witty and lighthearted. However, as is the case with the current administration, plans are constantly derailed, morale always unstable and when you attempt to wake up on a random Wednesday morning going about your day, you end up with Breaking News alerts of something else this man has done.

This time out of nowhere it was a ban on Transgenders from serving in the military.

In a moment of self care, I disabled CNN breaking news alerts on my phones months ago shortly after the clown in chief was inaugurated. Mentally I couldn’t handle the constant news stories about something else he had done mixed with everyday stress. I got wind of the story by way of People Magazine alerts and instantly flew into a blind rage.

I went to Twitter and it was no surprise that full blown chaos had erupted. 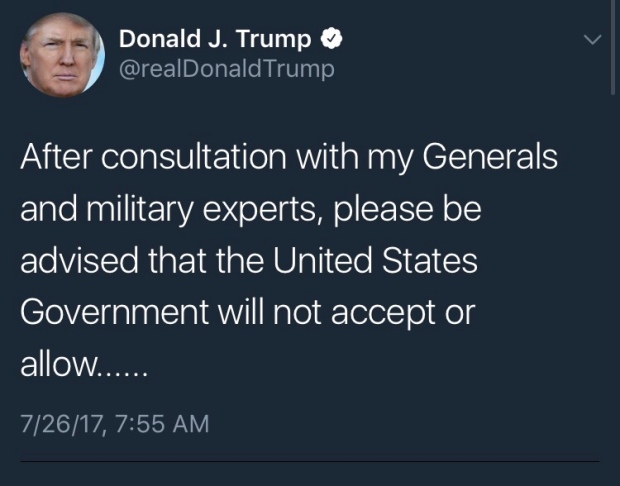 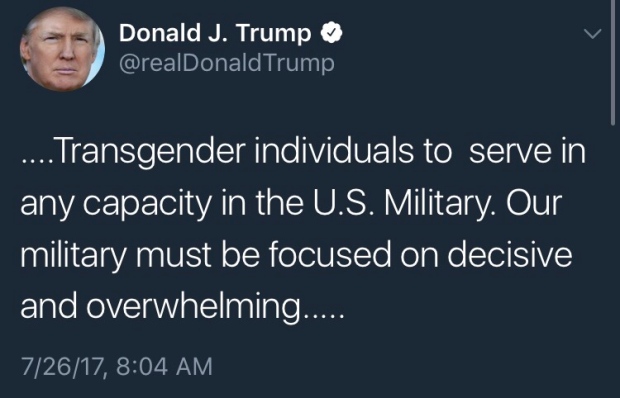 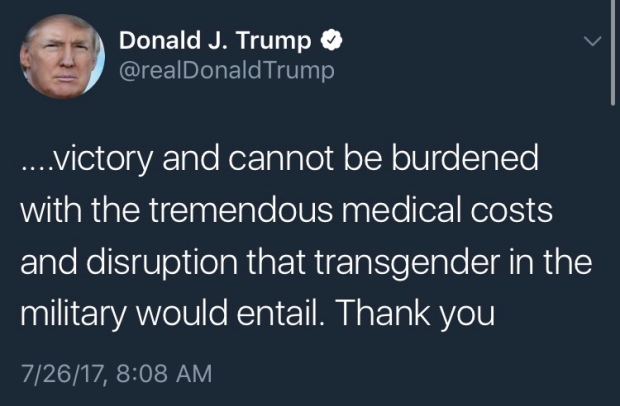 Of course, as is his deluded way, Trump announced the ban via Twitter. The use of the word “burden” to describe Transgender people is in itself disgusting and appalling. Reading my timeline only added to my fury as I saw my transgender Twitter friends hurt, disappointed and blasting their rage in a series of tweets. Well, it’s no surprise that I was right there along with them.

At this point in his “Presidency”, nothing should come as a surprise. I fully expect a fleet of ships to show up to shore one day and all black people will be shipped back to Africa.

Despite knowing that he is capable of any and everything, I didn’t see this coming. I had no idea this issue was even on his radar, but as with all things Trump it’s as if he wakes up one day and decides, “Who can I fuck with today? Oh I know who. Transgenders.”

The reasoning behind the ban was asinine as always with him trying to hinge the decision on medical costs. 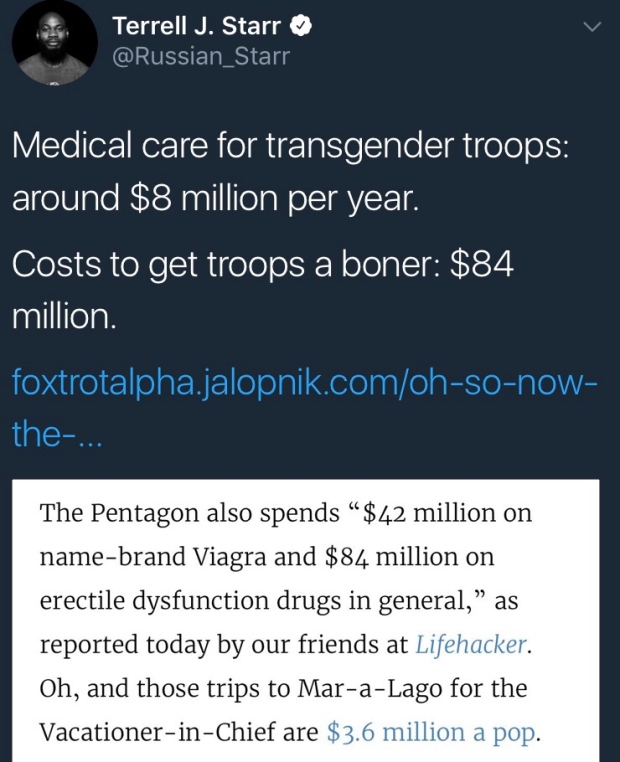 Cue the fact checkers who quickly debunked that theory by pointing out the military spends more on Viagra than for Transgender medically related costs. That didn’t stop his minions/cult worshippers who continue to stand behind him even with facts and figures staring them in the face saying completely otherwise.

It is no secret that people join the military as a way to pay for their education, health benefits and overall financial reasons. If a Transgender person signs up to get money for their reassignment surgery, how is this any different than someone who signs up to pay for college? People can do with their money and benefits what they see fit. At the end of the day, regardless of how they are using the money or their reasoning for signing up one fact remains: they are risking their lives for this country. Transgender soldiers have just as much chance to be killed while on duty as anyone else. Focusing on the why’s is dumb and counterproductive. It’s just another way for Trump to drum up some type of controversy and deepen the divide that has been buried beneath the surface and waiting to spill over in this country for the past decade.

Later in the day, after much medicating, walking, screaming and everything else I could do to calm myself, I started to put something together. In the midst of dragging a Trumpkin on Twitter who of course didn’t respond after being hit with facts, there was a tweet that caught my attention about another healthcare vote today. CNN vaguely reported it but it didn’t come through a breaking news alert. Why is that?

Because all attention was on the Transgender ban. While everyone was up in arms about that issue, there were less calls to Senators and a lowkey vote to Repeal ACA without any substitution. By the time I even realized the vote was happening, it was completed and failed. One tiny victory, one small hurdle that we get to claim in the midst of the madness.

The bigger issue is the timing of his announcement which was nothing but strategic. Trump had not run the ban across the Pentagon who currently has 15,000 transgender active military members. This was typical off the cuff Trump and his way of playing a very dirty game that has clearly sustained him in the business world for years and now he’s playing it with the fate of this country.

Adding insult to injury, he tweeted something about worshipping God and not Government, setting off another firestorm. 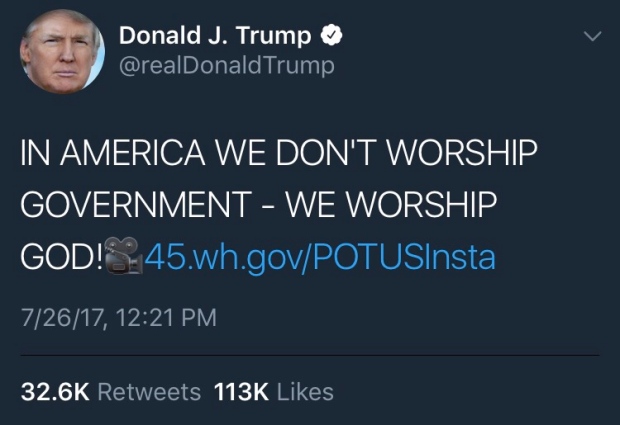 He knew exactly who he was catering to like the manipulative bastard he is, the Evangelical base that is searching for any mention of religion so they can start spouting off their bible verses and using it to further their racist and homophobic agendas.

I could write a thesis on Religion and the hypocrisy of the GOP because it’s just that long and sordid but for now I’ll just say this.

Getting the poorly educated bible thumping group all rowled up in comment sections on social media saying things that dont make any sense, but always pointing back to God is the type of behavior that many fear because it is reminiscent of other Dictators in history that came to power. Trump and his cohorts are manipulating people who want to believe in something and felt abandoned by the past administration because it didn’t cater to their conservative agendas and believe equality feels like oppression. Now these people who have sat silent and seething for 8 years while Obama was in office feel empowered based on this ban to further oppress and strip rights away from groups they felt may be getting a little too “close” to where they are.

The wealthy white elite want to stay that way and a black man getting in the White House, suddenly passing reforms, giving rights and a platform to groups that have always been on the outside was just too much for them to handle. They are trying every dirty trick in the book, measures that have started wars and led to loss of life. This administration wants to keep every disenfranchised, oppressed group in their place which is beneath them and constantly begging for a seat at their table. They want to control our destiny and where and what we can do despite what education or abilities we have.

It’s all rooted in fear, hatred and narcissism. This is becoming a dictatorship, plain and simple. My only hope is that people don’t give up, that some how this “God” that everyone loves so much and praises at their convenience somehow turns the tables and gives them exactly what they deserve.

This isn’t about vengeance or revenge.

This is about the core principle that the foundation of the Bible and Christianity claim to be founded on…Treating others the way you want to be treated.

Update: Since I originally wrote this, the late night Healthcare vote that the GOP was counting on has failed. Another victory.